The FIFA World cup 2026 or United 2026 FIFA World is going to host by the 16 cities in three North American countries, which include the quarterfinals, semi-finals, and the final a total of 60 matches.

The host countries are the United States and neighboring Canada and Mexico which will host 10 matches. And this is the first-ever tournament to host by three nationals collaborating with each other for one tournament, after the 2002 FIFA World Cup tournament.

Two nations South Korea and Japan have conducted the 2002 FIFA World Cup also this is the tournament to include 48 teams expanded from 32 teams now many new teams have a chance to enter for FIFA World Cup first time.

The United States bid beat their rival bid by Morocco during the final vote at the 68th FIFA Congress in Moscow.

Here is a detailed summary list that will clarify the 2026 FIFA World Cup Host Selection Qualification and Venues of the USA, Canada, and Mexico.

The qualification process for the 2026 FIFA World Cup is not yet to be decided but there are slots as follows. The FIFA Council is ready to decide which will be the host for this tournament.

On 30 March 2017, FIFA Council Bureau has proposed the slot allocation for the 2026 FIFA World Cup and suggested to submitted the ratification by the FIFA Council.

The United bid identifies 23 potential host cities from which 16 will be selected: 10 in the U.S. and 3 each from Canada and Mexico. 2024 FIFA World Cup Final will be played at MetLife Stadium in New Jersey.  There will be 16 venues but still, the final result is not ready for the tournament. 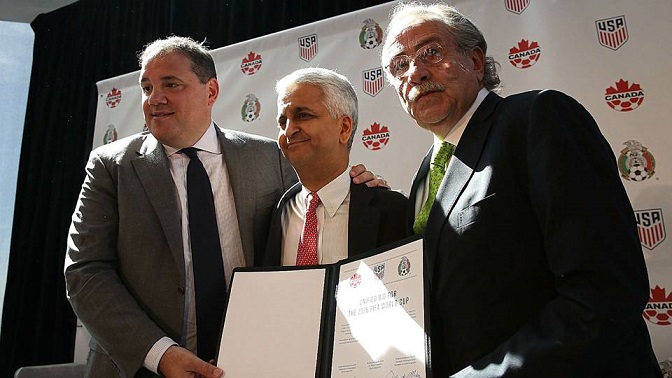