The 2022 FIFA Men’s World Cup will be the 22nd edition of the FIFA World Cup tournament. The upcoming 2022 FIFA World Cup Stadiums take place in Qatar from 20 Nov 2022 to 18 Dec 2022. We are sharing all FIFA Qatar World Cup 2022 Stadiums list that will be selected for Men’s world cup 2022 tournament in Qatar.

If you want to check the 2022 FIFA World Cup ticket and don’t wait any longer and be ready to fly, FIFA World Cup 2022 tickets will be available and you can choose the best location view in the stadium. FIFA is going to the announcement the tickets in the last month of the year, they will provide all tickets with each group detail, including quatre-final, semifinal, and final matches.

Now for Qatar World Cup 2022, there are a few months left. Al Khater said that it’s been 10 years in making it possible and surely is going to have the biggest event ever for the Middle East.

It will bring all the religions together for the biggest single-sport event. They said our all stadiums have been completed whereas the remaining Three Stadiums’ construction work has now been completed. Now, all stadiums are ready for the tournament.

The number of stadiums is Eight and the number of cities is Five where Lusail Iconic Stadium, Al Bayt Stadium, Al Rayyan Stadium, and Al Wakrah Stadium already has selected from the final list. It will be the last to involve 32 teams.

The tiny Gulf nation will be the first from the Arab world to host the World Cup. FIFA President Gianni Infantino visited last year Qatar capital Doha, after inspecting he said” All 8 Stadiums are under progress and it will be completed in 2021. FIFA World Cup 2018 held was Russia, it was one of the best world cups forever and we will hope it has to be even better.”

All the Qatar World Cup Stadiums will be completed two years before the schedule of the tournament start.

The location of the stadiums is about 23km north of Doha. The Lusail Stadium is one of the most important football stadiums of the tournament because of the two biggest matches held on the ground, It will be selected for the opening ceremony and the Final match of the 2020 FIFA World Cup. But also this is going to give many facilities including island, luxury shopping,  and many more. It is one of the beautiful football ground in the list of Qatar World Cup Stadiums.

It is a proposed FIFA world cup stadium which has been built in Al Khor. The 60,000-capacity stadium construction contract was awarded in 2015 and it will be expected to open end of 2019. In this Stadium the interior very outstanding if you see the stadium is quite different from other.

Ahmed bin Ali Stadium or Al Rayyan Stadium was built in 2003 and a spectacular host to 2022 FIFA World Cup matches. Its capacity is set at 40,000 (net), and construction‎ is under work. It is also a multi-purpose stadium in Al Rayaan. It is located few kilometers from Doha.

It is located in the southern city of Al Wakrah. It has been built with a 40,000 capacity and work has almost been done. It will be started publicly before the end of 2019. The best thing about the ground is the outer beauty of the stadium is made in such a way that attracts people toward it.

Experts from FIFA and Qatar assess progress at four proposed World Cup stadiums. It is the capital of Qatar with a population of 1 million people.

It is also known as Qatar Foundation Stadium, on the outskirts of Doha. It’s already the second stadium in Doha to have a big lift and it has been selected for the quarter-final match of the 2022 FIFA World Cup. 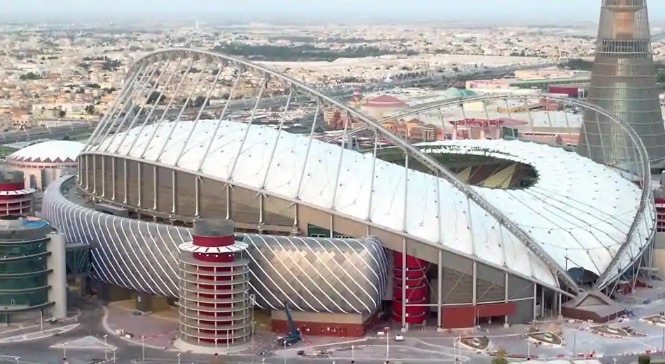 It is an old multi-sports stadium, which was built in 1976. It has hosted many tournaments in Doha. The 40, 000 capacity stadium has already hosted the Gulf Cup, Asian Games, and the AFC Asian Cup.

The Ras Abu Aboud Stadium is a few kilometers away from Doha and the amazing thing is that after the 2022 FIFA World Cup this Stadium will be pull down. The capacity of this ground is approx (40,000 seats).

It is located 12km south of Doha’s skyline and seafront. New Al Thumama Stadium will have a smooth and simple outer form, covered with white cladding. The capacity of the ground is 40,000. The Al Thumama Stadium is one of eight stadiums of Qatar World Cup stadiums and opened 22 October 2021. It’s the first Qatari stadium to be designed primarily by local architects. The stadium inspire form mimicking that of gahfiya, traditional Arabic headdress.